Doing this because I never do anything because I am awful

Looking back, did you write more fic than you thought you would this year, less, or about what you'd predicted? I wrote more than I thought I had written, does that count?

What pairing/genre/fandom did you write most? Merlin, Merthur, and Angst.  Of course.

What pairing/genre/fandom did you write that you would never have predicted in January? An anon fic that I will never own up to and you can't make me. >.>

Did you take any writing risks this year? I wrote in the middle of a conference surrounded by people who could look at my notebook at any moment.  If that isn't risky, I don't know what is.

Do you have any fanfic or general writing goals for the new year?  Finishing all my wips.  What can I say, I'm a dreamer.

From the past year of writing, what was your...

Best story of this year: The fic I wrote for texasfandoodler's art, Fool Me Twice, was probably the best.

Most popular story of this year: The Ring Around the Rosie series was the one I had the most requests for sequels for, but again, Fool Me Twice had the most kudos.

Personal favorite: This could probably go for under-appreciated too, but I love The Servant and the Frog.  Even I didn't know where I was going while I was writing it, and in the end it was just silly fluffy fun, which I pretty much never write.

Most under-appreciated: I'd say the sparkly sparkle sword in All that Glitters is Not Gold (but it's probably magic).  But it's appreciated by me and pandragolot, so that's what matters.

Most fun to write: Instant Satisfaction.  I giggled pretty much the entire time I was writing it.

Story with the single sexiest moment:  Again, that anon fic.  Which none of you will ever find (no, that isn't a dare).

Most "holy crap, that's wrong, even for you" story:  I've heard We Could be Immortal is pretty brutal if you're not like me and no longer have a soul.  Sorry.

Most challenging to write: The Other Side of Limbo.  I cried pretty much the entire time I was writing it.  But in the end I felt a bit better, so there's that.

Biggest disappointment: One Step Back.  I had meant it to have an entire other section so the ending wouldn't be so rushed (there's a hint in the beginning of "Merlin's favourite customer" who was supposed to turn out to be Morgana), but I just wanted to finally get it out of my wip folder so I didn't add it.

Favorite opening lines: Gwaine was not an evil man.  No, really, he wasn’t.  Okay, not in general anyway.  It was just that sometimes problems occurred, and those problems required a solution, and on occasion the path to said solution just happened to allow for some entertainment on his behalf.

Other favorite lines: SO MANY.
-Now the frog was pouting. The fucking frog was pouting.
-Merlin cringed.  Arthur sounded suspiciously smug.  This could only mean disaster.
-"I’m your prince, Merlin," he panted softly.  "I decide what you’re worth."  With that, he took his sword and smacked Merlin over the head with the hilt.
-Somehow his fingers had turned into sausages throughout the night.
-“Oh, Arthur?” Gwen called after him.  “Merlin just called.  He wasn’t quite sure: is he supposed to actually feed Alex or can he just set him out in the sun for an hour to soak up nutrients?”
-"As Morgana pointed out later, once Gaius had left from his inspection, Merlin was grinning far too brightly for a man who just been kidnapped, shot, and set on fire."
-"Merlin Emrys, age 26, passed away last night after a long battle with brain cancer." I'M KIDDING.

Most telling fic:  I don't know, honestly.  I think they pretty much all tell that I am a soulless heartbreaker who occasionally likes to pretend to be a squishy human.

Various Movie Fusions (because I can't watch anything without thinking: "Imagine if this were Merlin and Arthur...")

Found a wonderful resource for when I want my fanfics to really follow canon.  Scar fics always interest me, just because it always raises the question for me: how on earth did noone notice? Even if you just take the canon ones mapped out here and ignore the added ones, that's a heck of a lot of damage for a servant untrained in battle who supposedly hides whenever there's conflict. 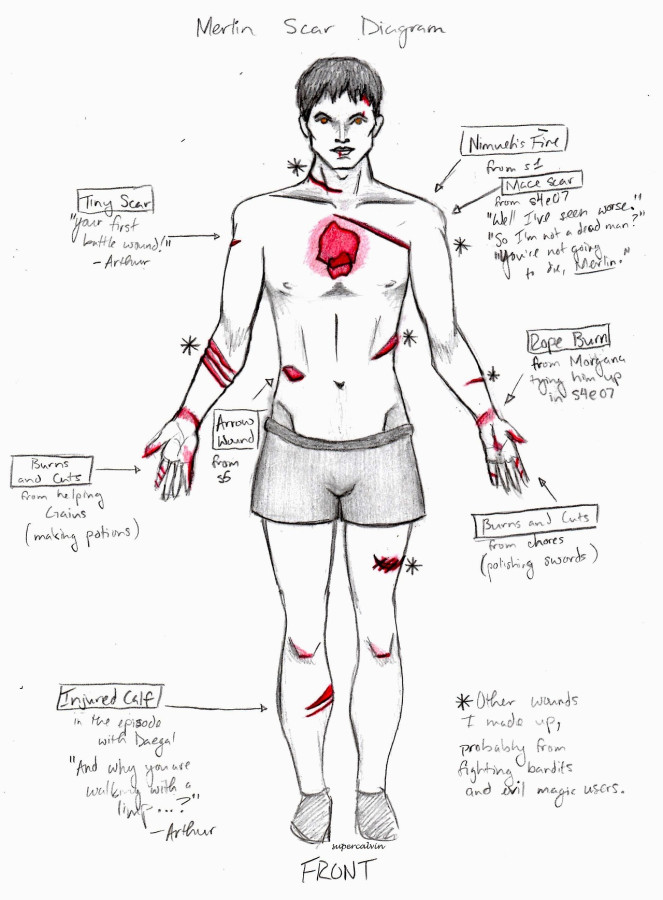 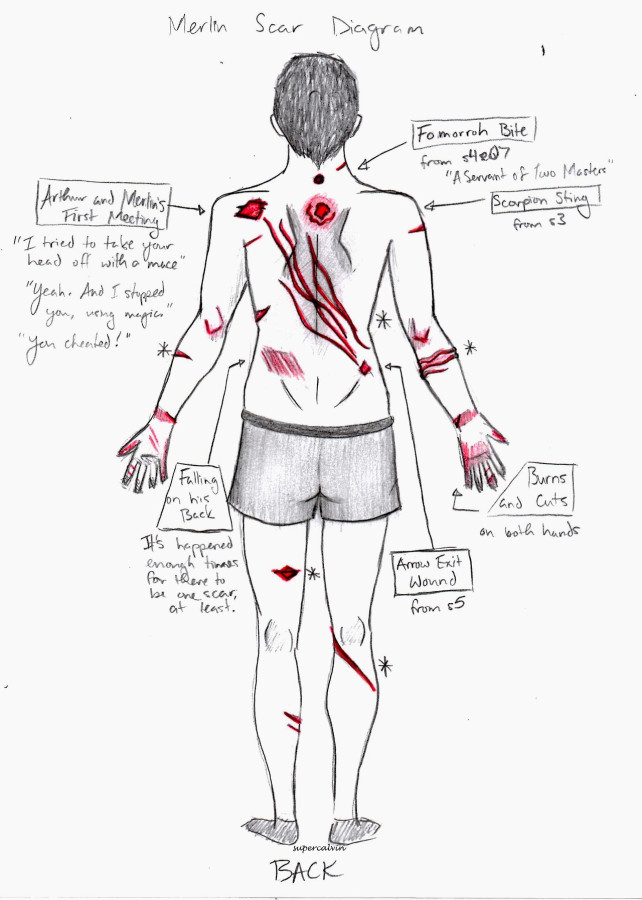 It's affecting my ideas for fanfiction prompts.  (Also, affect and effect are two of my least favourite English words.  I can never figure them out.)

I need to stop my brain coming up with ideas.  I already have twelve hundred more than I could ever write.  I need more hands.  Or brains.  Or motivation.

Signed up as a pinch hitter for the Merlin Reverse Big Bang.  Now I've got another piece added to my plate.  I'm hoping the new stimulus will help my lack of wanting to do anything.  I still have three WIPs I'm chipping away on, and a handful of new prompts (I just love prompts).  If you have more motivation than me, go for it!


On a happy note, my flatmate and I got kittens!  Two little black balls of fluff.  We named them Southkit and Northkit (If you've read the WarriorCats series by Erin Hunter you will understand this reference).  My flatmate picked the first names because she's is really looking forward to Southpaw (a reference that had to be explained to me).  I'm letting her have it, because I'm looking forward to Northstar.

At this rate I'm not going to have a free moment until June.

-Morgana kidnaps Merlin and Gwen then holds them at seperate locations, forcing Arthur to choose between them.
-Sigan succeeds in possessing Merlin, but decides to try and take advantage if Merlin's position close to the crown (especially now Arthur feels guilty for not believing the truth about Cedric) to do even more damage.
-Merlin's leg is crushed by his horse and Gaius (with the help of the knights) has to amputate. (I'm really attached to this one being that I live with limited mobility myself).

Just gonna make a list of prompts here that I'm either looking for or hoping to write one day so I don't lose them.


I could go on, but I think this is enough for now, right?
Collapse